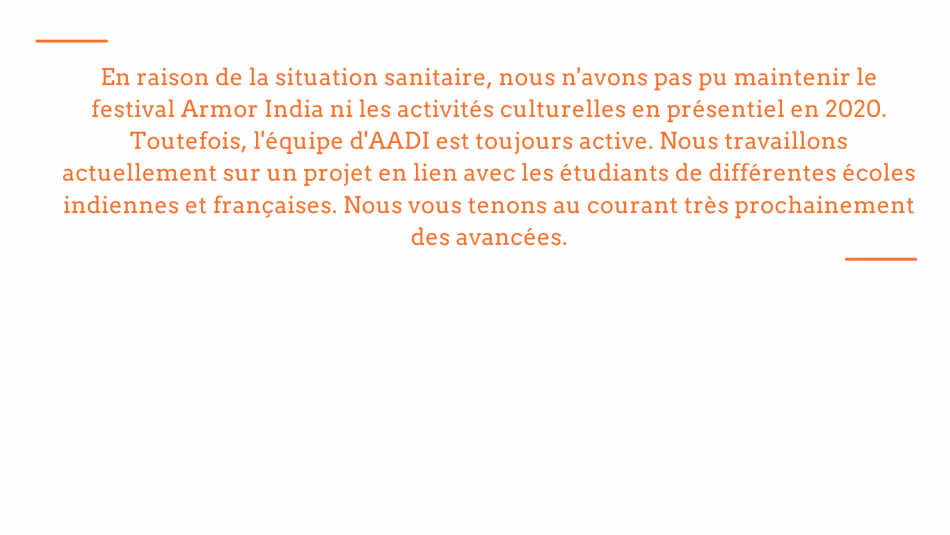 AADI (which evokes the Sanskrit word meaning “origins” or “beginning”) was registered as a French charity in February 2004 . As its name implies, this association was intended to re-establish and deepen the links between India and the region of Morlaix (in Brittany, which was historically known as Armorica or Armor).

AADI took its inspiration from the seafaring traditions and voyages to distant lands that have marked the history of Morlaix, and the bonds between the old Tobacco Factory (known as the Manufacture), the Dupleix family, and the Compagnie des Indes. AADI’s aim is to reactivate these connexions in today’s world in which modern India and the “new Indians” are poised to play an increasingly important role.

To introduce local people to this idea, in June 2004 AADI, with support from the Friends of Morlaix Museum , organised an exhibition entitled “From the Tobacco factories to the Indies. The Dupleix family in Morlaix. This exhibition was subsequently displayed in various other towns in the region. It was at this stage that AADI helped to restore the twinning relationship between the town of Morlaix and the French naval Frigate, the Dupleix. This bore immediate fruit in the voyage of ten schoolchildren from Morlaix on board the Dupleix in July 2004.

The areas of cooperation have now been extended to encompass the whole of the Brittany region of N.W. France in order to make an active contribution to propagating a better and more up-to-date perception of India and its potential amongst the local population. In particular, AADI hopes to broaden the international outlook of young people to areas other than humanitarian aid.

India is a 21st century laboratory, where huge forces conflict in a global challenge that we tend to underestimate, even though it is bound to affect all of us. Despite some shortcomings, the democratic system continues to advance in India, and the country is trying to deal with inherited social problems, and to eliminate various forms of discrimination. Here in France, some of us have unjustifiably and even hypocritically condescending attitudes, because ours is the land of the celebrated “French revolution” Our ignorance of world current affairs all too often leads people here to underestimate the importance of what is happening in India, whereas we could learn a lot.

It is crucial that we do not remain mere bystanders in this dialogue with India on these topics of worldwide significance. The ability of the Indian model to realise its full potential as a successful, democratic trading nation is crucial.

The areas of cooperation range from the cultural sector (exhibitions, entertainment, guest artists) to the academic sector (student trips and exchanges that we hope will lead on to more ambitious forms of partnership). An initial venture involving students at the technical IUT University of Morlaix in 2005 has subsequently been extended to other young people in the region. AADI also provides business training courses covering cultural diplomacy, economics and business practice in India.

To focus structures and entities hitherto considered to be following parallel paths on the same goals, and to create bonds with other groups here in Brittany who are also looking out towards India, in the reaffirmation of a twofold goal: cultural heritage + a prosperous future for our young people. This action is part of a move towards decentralised cooperation with India. The first Meeting to discuss this took place in Delhi in January 2010, and it emerged that although Brittany was well represented, its contribution was uncoordinated, and efforts are now being made to coordinate it and make it more fruitful. AADI intends to play a role in this. Creating platforms of this type will help to promote bilateral exchanges at the economic level.

Every year since 2007, AADI has organised the ARMOR INDIA festival of Indian culture, which often includes novel or exclusive items. Since 2008 it has been inaugurated by the Ambassador of India, and in 2009 it was extended to include venues in the neighbouring Côtes d’Armor département, with the active involvement of the Conseil Général and the idea emerged of a biennial event. The 2010 festival was held in June, and was carried out in cooperation with the Indian Embassy and the NAMASTE FRANCE programme (www.namaste-france.com). This festival is not simply a cultural event ; it is an integral part of the strategy described above.